The Foundation was established in Milan in September 1999, following the desire of Piero Portaluppi’s heirs to set up a centre for studies, research and dissemination of information, in order to re-enhance the architect’s works and his personality, recapturing the different aspects of his oeuvres, even the lesser known ones. This is the main objective of the Foundation’s bylaws.
Therefore, the first work, started in December of 1997, was focused on retrieving Portaluppi’s entire archive, which had been dispersed after his death, so that all the material that was recovered by the Foundation could be studied by others.
In order to fulfil its primary purpose, the Foundation aims to support research that is currently underway, which will ensure the retrieval, acquisition and restoration of material referring to the architect’s work: documents, drawings, transparencies, sketches, pieces of furniture, objects, photographs, videos, texts and publications. 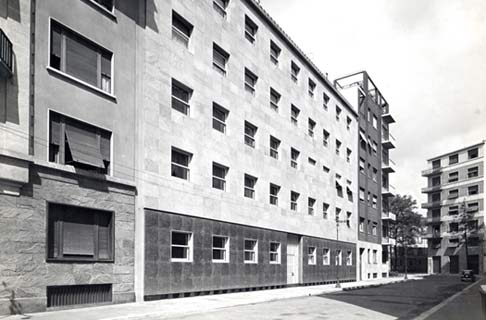 The Foundation’s premises are situated in the centre of Milan, in a building designed by Portaluppi at the end of the 1930s, exactly where the architect had his own studio.
The restoration of the premises aimed to retrieve many of the features that existed during the architect’s lifetime. In fact, his taste and choices are reproposed, the original layout of the rooms has been recreated, the precious marbles used for the flooring and the colours of the finishings have been restored and the library has been extended.
The premises are divided into two large rooms, which are used for exhibitions and conferences, and one room that houses the library and the curators’ office. The windows overlook an internal courtyard, which can be accessed in spring and summer.
The library contains Portaluppi’s publications and a bibliography of his works.
The Foundation conserves and makes available to its users an extensive collection of architecture magazines from all over the world, which belonged to the architect.

In addition to being a centre for studies on Piero Portaluppi’s works, the Foundation periodically organizes and hosts initiatives on subjects that were dear to the architect: design, drawing, cartooning, photography, cinematography, essay-writing, puzzle-solving and collecting objects. Exhibitions, conferences, seminars and debates are organized to stimulate debate on topics relating to architecture, art and culture.
The Foundation’s activities and scheduled events can be viewed on its website.

A Scientific Committee is established every time an exhibition is organized in the Foundation’s premises, and it avails itself of experts and professionals in the specific area of the theme of the exhibition.